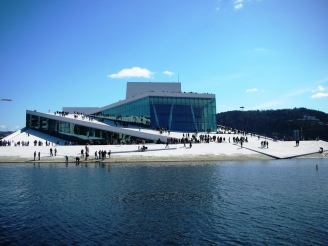 Opera House in Oslo is one of the most famous cultural institutions of Norway. The theater is located on the banks of the Oslo fjord.

Construction of the theater lasted four years. At the grand opening of the Opera House, which was held in 2008 on April 12, attended by the Queen of Denmark, the King of Norway and the President of Finland.

On the appearance of the theater building looks like a huge iceberg, around which cleaved from his lumps. Draws attention to the unique roof of the theater - it is inclined towards the water. Visitors to the theater have the opportunity not only to see the plays, but the climb to the highest point of the roof and enjoy the scenic view of the sea.

The main hall of the theater can accommodate about 1,364 spectators, is made ​​in the shape of a horseshoe and has a marvelous acoustics. It is not only used as a hall for performances, but also as a space for banquets or receptions. Hall highlights the huge chandelier, weighing in at 8, 5 tons.

To get to the National Opera House in Oslo is on the subway or on any other public transport passing through the central part of the Oslo Fjord.

Feedback
Your attention and time spent on the site IGotoWorld.com is greatly appreciated. If you have any questions, wishes, complaints, or you desire to learn more about us, select the area you are interested in and click the link to make a comment or ask a question.
Feedback form
Request submitted successfully.
Send