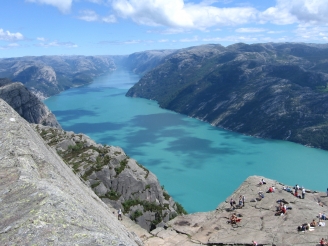 Lysefjord is located in the southern part of Western Norway, in the region Ryfylke, near the cities of Stavanger and Haugesund.

Virtually all of the Lysefjord is cut cliffs that hang over the water. Fame Lysefjord brought an unusual rock formation Kjerag. Gained worldwide fame is the Pulpit Rock, which is often called - "The Pulpit." It is a flat plateau, with an area of 600 square meters.

The most impressive beauty Lysefjord from the deck of the ship's tour, as well as from the board of the oldest ferry Stavanger.

To get to the Lysefjord possible by car from Oslo, Bergen, Stavanger. From Bergen road will take a little more than four hours. You need to go on the highway E39 and 134 to Olena, and then on the highway rv. 514 to Rupeyda. Continue to follow the road to the south Ryufyulkevegen. Oslo can be reached by car, taking advantage of one of the three routes. Here's one: follow to Drammen on the highway E18. From the drama on the highway through the province of Telemark to Røldal. Then head south on the road to Ryufyulkevegen Oanesa. This route will take you about 7 hours. From Oslo to Lysefjord can also be reached by train or plane.

Feedback
Your attention and time spent on the site IGotoWorld.com is greatly appreciated. If you have any questions, wishes, complaints, or you desire to learn more about us, select the area you are interested in and click the link to make a comment or ask a question.
Feedback form
Request submitted successfully.
Send